An excerpt from the story:

Sixteen people have died in Manchester in the past four years while infected with a highly resistant superbug, figures show.

Some 1,241 patients were affected within the Central Manchester University Hospitals trust area from 2009 to 2013, the figures show.

Despite infection control, the numbers have increased year on year. 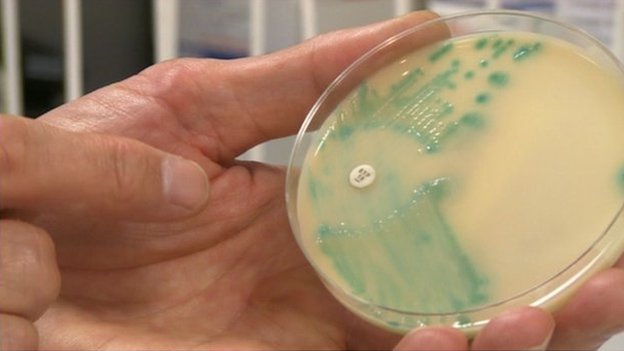 The figures, revealed in a Freedom of Information request by the BBC, found 62 patients so far have suffered blood poisoning – with 14 confirmed deaths within 30 days of infection – at Central Manchester University Hospitals NHS Foundation Trust.

Two further deaths have occurred in the current year, the hospital trust confirmed.

KPC, which causes urinary tract infections and pneumonia in sick patients, is resistant to carbapenems, the last major group of antibiotics to work against multidrug-resistant bacteria.

The trust said the chemical, an enzyme, that KPC uses to render antibiotics ineffective had now entered other bacteria, including E. coli and Enterobacter.

“This trust has and continues to make strenuous efforts to control and reduce this infection. We continue to work very closely with Public Health England at both a local and national level to develop solutions for the long-term management of patients,” it said.

The trust stated that all the patients who had died were seriously ill. Some had diabetes, kidney problems or transplant rejection; some were suffering from leukaemia or other forms of cancer.

Central Manchester Hospitals has already had to review guidelines on antibiotics and the treatment of patients who require bowel surgery or cancer treatment that may leave their immunity compromised.